This article was written by Tom Mason for the Spring/Summer issue of Izaak Magazine – an in-depth, behind the scenes, all-access publication highlighting the incredible, everyday happenings at the IWK Health Centre.Dr. Laine Johnson brings highly-specialized airway reconstruction surgery to the IWK 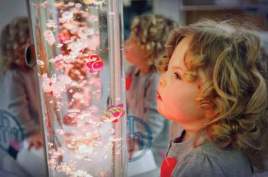 Larkin looks at the plastic fish and bubbles

Larkin Pottle was born four years ago with tracheomalacia, bronchomalacia, and subglottic stenosis of her trachea — conditions that severely restricted her ability to breathe on her own. Her parents, Rhonda and Brent Pottle, struggled with the tracheotomy that allowed her to survive the process. As she grew, breathing on her own started to look

Like a possibility; surgery to allow this to happen was the next step for the Pottle family. Tracheotomies are one of the most vital surgical procedures in modern medicine, but they are actually very old. The surgery is depicted on Egyptian artifacts more than 5,000 years old and described in Sanskrit texts from around 2,000 BC. A tracheotomy involves placing a tube through an incision in the neck to bypass the nose and mouth and allow air directly into the trachea. Every year they save countless lives; but for most young children who have undergone the procedure,

a normal life doesn’t begin until the tube has been successfully removed. That can prove to be difficult.

That’s where Dr. Liane Johnson comes in. Dr. Johnson is a pediatric airway surgeon at the IWK, the only doctor in Atlantic Canada to perform a specialized form of airway reconstruction surgery in children. The innovative technique involves using the child’s own rib cartilage to expand the scarred airway to attempt to achieve a normal diameter airway (air passage). Because the technique relies on tissue from the child’s own body, there are no issues with rejection.

Dr. Johnson learned the complex procedure during a two-year fellowship at the Cincinnati Children’s Hospital Medical Center under world-renowned pediatric otolaryngologist Dr. Robin Cotton, who pioneered the technique 30 years ago. She has already performed about 20 of the surgeries at the IWK. She says the procedure offers the patient and family a degree of independence that is life-changing.

“With proper patient selection, they can be very successful surgeries,” she says. “It’s rewarding to see the results.”

Larkin Pottle’s conditions were serious and because she needed constant medical care, Larkin could never be left alone. This left her family with the task of learning how to take care of her properly at home. Any kind of mucus plug or blockage of the tracheostomy tube could also be disastrous. It was a 24-hour-a-day job for Rhonda and Brent,

one that required plenty of professional help. “We had to get professional respite care at night so that we could get some sleep,” says Rhonda.

Rhonda Pottle cuddles her daughter Larkin Pottle as they wait for Larkin’s appointment at the IWK.

Along with the basic skills that every new mother learns — feeding Larkin and changing her diapers — Rhonda quickly became adept at a number of medical techniques, including suctioning a tracheotomy tube and performing mouth to trach resuscitation. If Larkin accidentally removed the tracheostomy tube, the Larkin family had to be prepared to perform CPR.

“It’s not that difficult. Anyone can learn to do it as long as they’re not afraid of it,” says Rhonda. Larkin was approaching her second birthday when doctors discovered she was breathing through her nose and mouth around the tracheotomy tube. It was good news. It meant the airway was growing and the problem was correcting itself. But scar tissue had formed, and Larkin’s airway needed to be repaired before the incision in her trachea could be permanently closed.

Rhonda began the search for a doctor who could do the surgery. She and her husband had already made plans to travel from their Stephenville, Newfoundland home to Cincinnati to meet with Dr. Cotton when they heard about the IWK program. “I heard there was a doctor in Halifax who had studied with Dr. Cotton and was using the same procedure.” The Pottle’s first visit to Halifax was a little disappointing. Dr. Johnson examined Larkin and told the family to come back in three months for reassessment as it was

too soon for the operation. “That’s the hardest thing to say to parents: ‘She’s not ready,’” says Dr. Johnson. “But if you do the surgery too early the consequences can be devastating. The last thing I want to do is set up a spiral of failure. Sometimes it’s just safer to wait.” 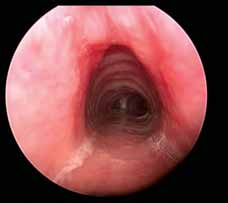 This picture was taken just below the vocal cords showing a completely open subglottic airway following placement of rib grafts.

When the day finally came, it was a long one. The Pottles spent eight hours waiting for Larkin’s surgery to end. Dr. Johnson constructed two rib grafts to expand the damaged airway, placing them carefully in the trachea below the little girl’s voice box. When it was over she was sedated and ventilated in the intensive care unit for nine days, but after stent removal she was soon breathing on her own. It was a success.

There have already been many milestones for the Pottle family. Larkin had a bout of the flu during the winter – a normal rite of passage for most four-year-olds, but one that would have brought on a serious medical crisis before the surgery. This time it was no big deal, says Rhonda. The family left for a Florida vacation in March, the first family trip since Larkin was born that didn’t centre around a medical appointment. Most importantly, Larkin is gaining a measure of independence that she didn’t have before. She’s getting ready to attend preschool and is making friends her own age for the first time. “She loves other kids,” says Rhonda. “Finally she can be a kid herself.”

To read the full issue of Izaak magazine visit www.iwkfoundation.org/izaak

Make a gift to the IWK Health Centre Foundation.