Since 1996, CTV Atlantic has proudly broadcast the IWK Telethon for Children and helped raised millions of dollars for the IWK Health Centre. Rachel Bower shares her experience of filming one of the remarkable stories that will be featured on this year’s Telethon broadcast.

My role in the IWK Telethon for Children is story producer. It is a role I am fortunate to have as I get to meet many incredible children and their families. 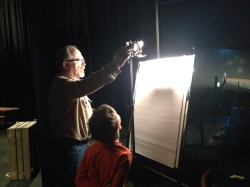 From the moment Josh and Steve met, they were inseparable. Josh was interested in how camera and lights worked, and Steve was happy to share his knowledge with his new friend.

Josh watches everything and quickly began to copy Steve.

After seeing how Steve set up the lights for his mom’s interview Josh set up the lights for his own interview. He helped Steve pick out beautiful scenic shots. When Steve, who is a master of lighting with found objects, was setting up for an interview Josh was right beside him asking him what he was doing.  At the end of the shoot, to Steve’s delight, Josh helped put the gear back into the CTV Production Truck. 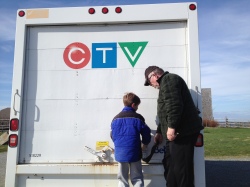 It was a pleasure to witness how well Josh and Steve interacted on this shoot.

To find out more about Joshua’s story tune into the 30th Annual IWK Telethon for Children broadcast live on CTV May 31 & June 1.

Make a gift to the IWK Telethon for Children.

Mary Thibeault is the Phone Volunteer Trainer in Halifax for the 29th Annual IWK Telethon for Children on CTV.

To me, Telethon means a time to recognize why we are here and what the IWK means to our community and to our families.

As a long time employee of the IWK in clinical practice, management and support roles, I have had the privilege of working with families and staff in both professional and volunteer roles. My first experience with Telethon was over 25 years ago as a staff nurse working in the Neonatal Intensive Care Unit where we shared stories that demonstrated the courage and passion of the most fragile patients and their families. At that time, as now, hearing how the IWK makes a difference to the lives of so many members of our Maritime community instills not only a sense of pride, but also a sense of significance.

I always believed it was important to share that sense of pride and to, in some way, give back what I could. So I started volunteering at the IWK Telethon, first as a telephone operator and eventually as the person responsible for insuring the hundreds of telephone volunteers are trained for their very important role. When my daughter was about three years old, I began bringing her along so that she could see the show and experience the excitement of a television production. I would have her with me during training sessions as my assistant and she would dutifully point to the different parts of a giant pledge form as I would describe how they needed to be completed.

She continued to come with me until one year, at age 11, she decided she had better things to do on a Sunday afternoon and went to a friend’s house instead of coming with me. So I went along conducting the training sessions solo. At the end of one of the sessions a long time telephone volunteer approached me and asked me where my daughter was. He said he had so enjoyed seeing her grow up over the years, it was an important part of Telethon for him, and he missed seeing her that year. I was deeply touched that he had remembered and at that moment began to realize what Telethon means to so many people.

I went home and told my daughter the story. She hasn’t missed a Telethon since. When she turned 13 we decided she was old enough to have her own job at Telethon and she was thrilled when she received her first official Telethon Volunteer name tag. Now, every year, she works as a “runner” on the set taking completed pledge forms to their appropriate location. The IWK Telethon has helped her understand the importance of philanthropy and how just a little contribution of time can mean so much to our community. It is a lesson I could never have taught her myself and one that I am extremely grateful for. That is what being part of the IWK family means. We help make a difference to our community and they help make a difference to us.

Make a gift to the 29th Annual IWK Telethon for Children on CTV.

Volunteers strengthen our communities and donate their time, talent and energy to improving the lives of those around them. April 21- 27 is National Volunteer Week, a time to recognize individuals who are making a contribution to their community. Dorothy Miller, of Saint John, New Brunswick, shares why she volunteers with the IWK Health Centre Foundation. 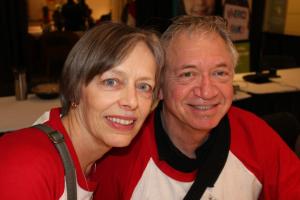 Dorothy & Lee at the IWK Radiothon in Saint John

Volunteering is a part of who I am. Finding a way to give back to my community has always been important to me.  Over the years I have given back to various events and organizations that hold a special place in my heart such as the IWK Health Centre.

Why the IWK you may ask? Although I do not have a personal connection to the Health Centre there are many individuals in my life who have benefitted from its services. We all know of someone whose life has been touched by the outstanding care that the hospital provides. This is why I jumped at the opportunity to get involved with this remarkable organization.

The health and wellbeing of children has always been a passionate interest of mine, so volunteering for the IWK Foundation felt like a natural fit for me. Last year, the IWK held its inaugural Radiothon in Saint John. Having experience as a training coordinator, I volunteered to help coordinate other volunteers needed to help make this event a success. I even recruited my husband Lee who jumped at the opportunity to get involved.  Although I knew that this would be a fun opportunity, it was better than I could have ever imagined! The energy that filled McAllister Place during our two-day Radiothon in 2012 was contagious, as the phones rang with calls from individuals from all over the Greater Saint John area who wanted to give to help advance critical care at the IWK. It was inspiring.

Last year I was approached to assist with the organization of the 2013 IWK Telethon at the Saint John broadcast site. It was an easy decision to make! I’m honoured to be involved with an organization that touches so many peoples’ lives. It feels good to give back to my community and if you have a chance to volunteer with this great cause in some form or another I urge you do it.  I’m excited to see what this year’s IWK Telethon will bring, and I have no doubt that it will be the best one yet!

Make a gift to the IWK Telethon for Children on CTV.